Although Korea isn’t world-famous for its tea, it is still a very important part of Korean culture. Serving hot tea to guests is a long-standing tradition in the country. Tea is not a simple drink but an experience.

In the early years (57 BC – AD 935), tea was considered a luxury drink and only royal families could enjoy tea. This tea was sourced from the Buddhist monks in Hadong County who consumed hot drinks with tea leaves. For monks, it was a source of calm and refreshment of the mind. Over the years, it has seen several ups and downs.

Up until the 14th century, it was an important part of Korean culture and there was a specific tea ritual where tea was served in a ceremony. Between the 14th to early 16th century, tea became unpopular and uncommon. It became a beverage of choice again in the late 16thcentury. Every time it was rejected, it found a home in the Buddhist temples, where the traditions were preserved.

This rise and fall went on for many years and at present tea is competing with coffee in popularity. And even though it is not popular amongst the young crowd, Korea still produces some of the best loose-leaf teas.

There are many different Korean teas – leaf tea, flower tea, grain and seed tea, root tea, and fruit tea. Each has a unique flavour and taste and have several health benefits which can warm or cool the body. If we go by common names, there is Jujube tea (Deachu-cha), Cinnamon tea (Gyepi-cha), Ginseng tea (Insam-cha), Green tea (Nok-cha), and many others. Not only these are rich in flavour and taste, but they also have somegreat medicinal properties and health benefits.

Out of all these varieties, there are some local preferences.

Omija-cha – This traditional tea is made from dried magnolia berries and it has a rich flavour profile. ‘Omija’ means ‘five flavours’ and this tea is a perfect representation of that as you can taste the saltiness, sweetness, bitterness, pungency, and sourness.

Yulmu-cha – It is made from powdered Job’s tears and nuts. It has a creamy, mild, and milky texture. This is a perfect tea for the winter mornings when you don’t have time for eating breakfast.

Yuja-cha – It is also known as yuzu tea made from Yuja marmalade. With its sweet and sour flavour, it is a perfect remedy for cold. It is packed with vitamin C and can be served hot or cold.

Bori-cha – This tea is made from roasted barley and is more commonly known as Barley tea. Its slight bitterness goes well with its deep roasted flavour. You can have it hot or cold as it tastes good either way. In many Korean households and restaurants, it acts as a substitute for water.

Drinking tea is not a simple act but it is an experience involving all your five senses. The traditional tea ceremony is referred to as ‘Darye’, which literally translates to ‘etiquette for tea’. It is a thousand-year tradition to bring peace to your mind and help you with meditating. The tea is served in traditional pottery made in kilns using porcelain, like Goryeo Celadon porcelain, which was quite famous in the Goryeo Dynasty in Korea (918-1392).

There are three different types of Korean tea ceremonies – Royal Darye, Seonbi Darye, and Friends Darye. The Royal Darye is for kings as the name suggests and it lasts for about 8 hours. The Seonbi Darye is for Korean Confucian scholars. The last type of tea ceremony, Friends Darye, is most common and resembles the casual afternoon tea of the West. Everything you need to know about Korean cuisine 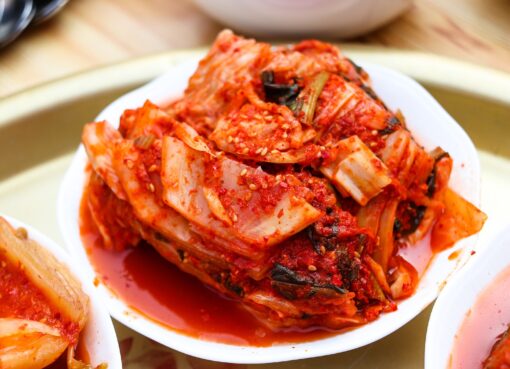 Exploring the Story of Kimchi which began in Korea